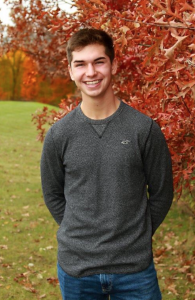 Garrett VanGilder was chosen by the Athletic Director’s of the Flint Metro League as the Male Athlete of the Month (April).

TENNIS
Garrett has been member of the varsity tennis team for four years.
Accomplishments include:

FOOTBALL
Garrett has been member of the varsity football team for two years … dual sport with tennis; joined because the team needed a kicker!
Accomplishments include:
JUNIOR
Varsity Letter
2017 Scholar Athlete Football

SENIOR YEAR
The season is still underway!
WRESTLING
Garrett was a member of the varsity wrestling team his senior year. Thus, making him a 4 sport athlete

No Events This Week

Events are added by athletic staff.
View All Events