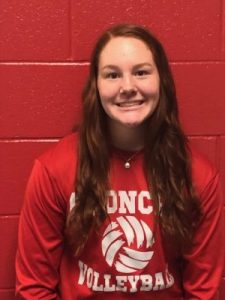 Congrats to Paige Weeder on winning Athlete of the Week for Volleyball. The following are Coach Maher’s comments:

The Bronchos finished strong this week with a 3-0 win against Linden and went undefeated in the Mt. Morris tournament to bring home the championship, beating a talented Brighton team twice in the same day. Paige Weeder played 6-rotations for the Bronchos in every match and was instrumental in their success. Against Linden, Paige finished with 2 aces, 9 kills, 8 digs, and passed a 1.73 on serve receive. Tournament stats are still being compiled, but in the first two matches (out of six), Paige had 4 aces, 16 kills on 28 attempts (hitting at .429), and 15 digs. Paige’s leadership and drive to win pushed her team through a long day and into a championship win.