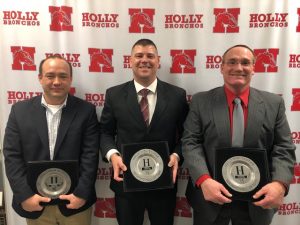 On Friday January 24th, four new members were inducted to the Broncho Hall of Fame during our basketball games.  The four men that were honored were Mr. Mark Mattingly, Mr. Brennan Brown (not pictured), Mr. Kevin Kernen, and Mr. Matt Turner.  Below are each of their biographies and accomplishments.

Mark Mattingly graduated from Hazel Park High School in 1980. He was a three-sport athlete.  He was a shot put and discus thrower on the track team. He was a league champion, Oakland County champion and district champion his senior year in wrestling. He was named 1st Team All State in football at offensive guard his senior year. Mark is also a member of the Hazel Park Athletic Hall of Fame.

Mark accepted a football scholarship to New Mexico Highlands University and was a four-year starter at offensive guard. After playing his four years he stayed and became a graduate assistant football coach for two years.

Mark has been with Holly Area Schools for 33 years. He is currently a middle school guidance counselor at Holly Middle School. He and his wife Debbi have been married for 30 years. They have two children. Tyler and Tori.

Kevin is a 1994 graduate of Holly High School.  During his time as a student athlete for the Bronchos, Kevin excelled on the baseball diamond.  Kevin was an all-conference baseball player his last three years of high school and during his senior year led the league in home runs, runs batted in, and batting average.  Kevin also earned all-region, all state, and academic all-state recognition during his senior baseball season.  To finish his high school career, Kevin was selected to play in the Dream Team All Star Classic at Tiger Stadium where he earned the game’s most valuable player award for his performance.  Kevin also excelled in the classroom at Holly High School where he finished in the top 10 in his class and amassed a cumulative GPA of 3.94.

Kevin continued his baseball career as he accepted a scholarship to play for the Michigan State Spartans.  During his time at MSU, Kevin earned two varsity letters.  Kevin had many baseball highlights as a Spartan, including a home run against Tulane in one of his first games and another home run against Big Ten rival Ohio State.  Academically, Kevin was on the Dean’s List every semester and graduated from MSU with High Honors, earning a Bachelor of Arts with a major in finance.  Kevin was also a member of the exclusive international honor society Beta Gamma Sigma at MSU.

Currently, Kevin is a managing director at Stout, a global financial advisory and consulting firm in Royal Oak.  Kevin and his wife Carrie reside in Lake Orion and have four children, Megan, Alex, Elizabeth, and Samantha.

Matt is a 2004 graduate of Holly High School.  During his time as a student athlete for the Bronchos, Matt was a three-sport athlete.  Matt competed in football, wrestling, and baseball during his time at Holly High School.  It was on the wrestling mat where Matt truly excelled though.  Matt was a four year letter winner in wrestling and was a team captain for three of those years.  To begin with, Matt was a four-time All-State wrestler for the Bronchos finishing third in the state as a freshman, second as a sophomore, second as a junior, and second again as a senior.  Matt was a two-time regional champion, a three-time district champion, three-time FML champion, a four time all league wrestler, a three-time Oakland County champion, a two-time Oakland County Tournament Most Valuable Wrestler, and is currently in the top 10 in career victories at Holly High School.  In the words of Coach Pluta, “Matt was an outstanding leader.  He was consistently the hardest worker in the wrestling room and his teammates followed his example.”

Upon graduating high school, Matt went on to attend a four year trade school and became a union glass worker.  Matt is currently a senior project manager in commercial glass and resides in Holly with his wife Lisa.

Brennan is a 1994 graduate of Holly High School.  During his time as a student athlete for the Bronchos, Brennan played four years of varsity tennis, three of which as our # 1 singles player.  Brennan was a three-time Flint Metro League champion and a state qualifier at # 1 singles his senior year.  After high school, Brennan went on to play collegiately for four years at Northwood University.  Brennan continued his education by earning an MBA in Management from Central Michigan University and an MA in Economics from the University of Detroit Mercy.

In 2004, Brennan returned to Holly High School to give back to a program that provided so much to him.  Brennan took over our boys and girls tennis programs during the 2004 season and continued to coach our teams for the next 9 years.  Over his coaching career, Brennan’s teams had a Flint Metro League record of 100 wins, 2 losses, and 3 ties.  His teams won 13 Flint Metro League team titles, 10 MHSAA Regional titles, and qualified for the MHSAA State finals 16 times.  Brennan also found time to serve on the Board of Directors of the Michigan High School Tennis Coaches Association.

Brennan currently resides in Aldie, VA with his wife Kristen and his three children Brayden, Brynnlee, and Brooklynn.

Boys Junior Varsity Basketball at Our Lady of Lakes

Boys Varsity Basketball at Our Lady of Lakes