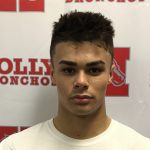 Jacob Honstetter had an outstanding night playing in only 2 quarters of action. He rushed for 90 yards on 7 carries and had 2 TDs (14 and 33 yards) and added 2 catches for 25 yards. Defensively, Jacob added 5 tackles and was a key defensive contributor to the Holly shut-out victory.  Congratulations! 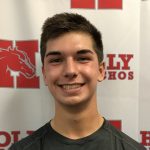 Week of Oct. 2 Garrett and his partner are 2 doubles league champions and look to be a high seed a the regional tournament this week. Garrett also is the the kickoff specialist for the varsity football team and is having a great fall season! 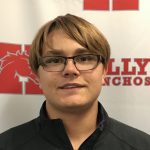 Justin’s outstanding performance allowed Holly to tie a red-hot Brandon team who, up to that point, had won every FML match they had played. Justin stopped 14 shots at Wednesday’s match vs Brandon – many of those shots were certain goals. But Justin’s cat like athleticism allowed him to make saves that frustrated Brandon’s attack 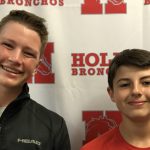 Week of Sept. 25 3 Doubles sophomore Wyatt Caldwell and freshman Garrett Reid dropped the first set in the FML tournament championship match to Flushing but were able to come back 4-6, 6-4, 6-2 to win the flight and help the team win the FML title!  Congratulations Wyatt and Garrett! 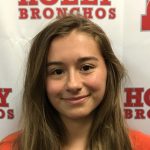 Monica ran 19:47 in the Coaching Legends Classic held at Huron Meadows last Saturday.  This is a season best time for Monica earned her 7th place and helped power the team to a 3rd place finish.  Congratulations Monica! 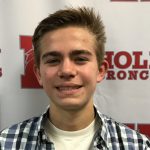 Sam led his team in two races this past week.  He placed 5th at the FML jamboree with a time of 16:43.16 and followed that with a 6th place finish on Saturday running a 16:40 in the Coaching Legends Classic at Huron Meadows.  Both efforts by Sam helped earn the running Bronchos 3rd place finishes.

Posted on October 9th … updates will be added as info is given to me by the coaching staff … stay tuned. Holly Middle School MS Wrestling (grades 6-8) Coach Mark Mattingly mark.mattingly@hask12.org 1st day of practice – October 25th from 3-5pm at Holly High School Ride transfer bus to High School – meet out 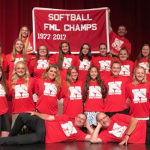 There will be a 30 minute softball meeting beginning at 2:45pm on Tuesday, Oct. 24th in room 304 (Mr. Hall’s room).  Any girls interested in softball should plan on attending. If you are unable to make the meeting, please contact Coach Scott Culver at scott.culver@hask12.org.

No Events This Week

Events are added by athletic staff.
View All Events